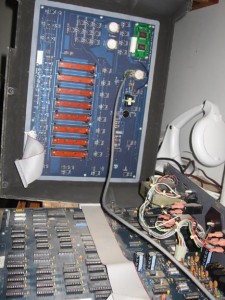 This was purchased by the customer some time ago, and he had stopped using it due to boot problems. It had sat in storage for some time and gradually degraded. It was a missing large touch-pad button, plus the boot diskette had been lost. Without the diskette there was no way of finding out what else is required, and the customer went off to find one.

A boot diskette was finally sourced, and after many attempts it finally booted. The boot issue needed to be addressed, and it showed a need for pad button switch cleaning. The LCD back-light was also out.

Cleaning of the dynamic pad buttons took place, but two were beyond saving, plus we had a missing cap. Replacements were obtained from Forat. The LCD back-light was replaced with one found on  Ebay, and the LCD cable (fell apart due to age) was replaced also. There was corrosion present, so the grounds were cleaned.  The power supply heat-sink was enlarged and greased as there was a lot of heat being generated there. 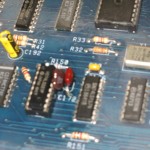 The boot issue showed as crashing with corrupt data on the display. When it did boot, very often it would crash when the floppy was accessed, indicating memory corruption from a bad read. This unit had been sent to an SP1200 specialist previously, and the floppy drive was replaced, and it looked like the 1-shot 74LS221 which times the data read had also been replaced. I put an oscilloscope on the data timing signal and found it out of spec, so I replaced the 74LS221 chip and selected a closer value timing capacitor which resolved the issue. One slider was replaced as it failed final test,  and this SP1200 was a solid performer again.