This is the red version, and this one had the hand-grip. It had several issues, the most common of which was a touchy power switch (causes oscillator drift). I go 2 ways on this repair, either wiring across the switch so it is permanently on (no-go if batteries are being used), or order a replacement from TechnologyTransplant; the customer voted for the latter.

The switch arrived and was fitted.   Switch cleaner was applied to all pots, switches, and sliders. I then re-soldered tracks around audio out and modulation connector, restoring switch operation and getting rid of crackles, and also re-soldered around the frequency and filter sliders as things were intermittent there.

The bender was only operating in one direction, the LFO push function did not work, and the unit needed adjustment as putting the VCO amount slider forward caused a frequency change. The last 2 items were cured by setting up the position of the bender on the pot shaft. The big issue was that the LFO switch was bad, and they did not make this repairable. I was unable to find a replacement (although having stripped that area out on a Juno-106 yesterday I see it looks similar). I managed to remove the old switch and modify it so that a micro-switch could be installed, and this works fine.

The unit was finally set-up to spec and sounds great!

This SH-5 came in with LFO-2 not providing modulation, and the led was dark, also the bender action was jumpy. The LFO-2 issue was due to a  bad CA1458 operational amp which was replaced and restored operation. The bender is metal on this unit and we were seeing a little grittiness due to wear and lack of lubrication. I stripped out the keyboard control panel and cleaned, lubricated (pot cleaned and a small amount of grease applied to metalwork), and aligned it. Tuning and scaling was a little off on both oscillators, and was adjusted to spec. 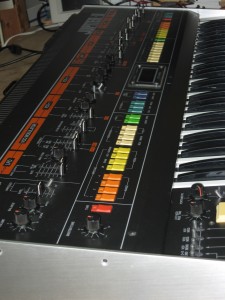 The customer had just purchased this keyboard and wanted it serviced as there was a lot of lint and slider gasket debris in the controls. The work order was to strip out the old gaskets and replace them with felt, clean all old debris from controls and circuit boards/case, lubricate the controls, and replace the battery. To back-up the patches prior to battery replacement (3.6v Lithium from Jameco) I brought an old cassette player into service, and it worked like a dream! Thick (3mm?) foam of the type originally used could not be found, so we went with the most rigid felt that could be found. Felt is not as rigid as the foam, so a lot of double-sided tape had to be put around the controls to hold it. I would not recommend felt due to its lack of rigidity and shedding, but until a better material can be found then we are stuck with it! The unit looks really nice, and the customer was delighted!

ad sounds tend to be the M5218AL IC’s. These are SIP’s and getting rare. I have had great success with mounting a 4558 DIP on a SIP module as can be seen on the picture here.

A number of these have come into the shop. I’m seeing power supply faults, corroded connectors (especially ones causing the bass keys to fail), and bad capacitors. Great sounding string synth.